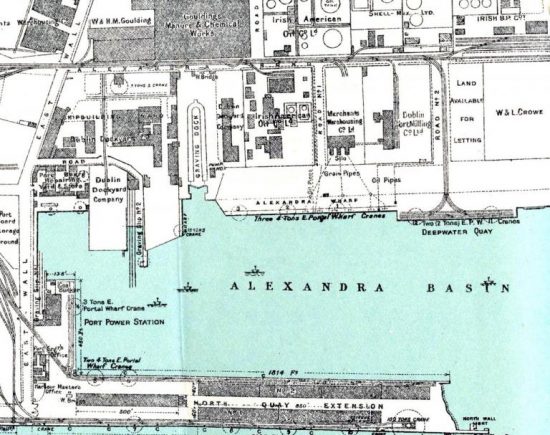 Have you ever passed by the odd looking, bell-shaped, red metal structure standing tall on Sir John Rogerson’s Quay and wondered what it is?  You could be forgiven for thinking it is a modern art sculpture or misplaced mound of metal.  It is in fact an ingenious feat of Irish engineering that was essential in building Dublin’s quay walls for 87 years.  This is Dublin Port’s “Diving Bell”.

Dublin Port Company today announced a new project that will shed light on this important artefact and will transform the Diving Bell into a new interpretive exhibition that explains its origin and history.

The Diving Bell was designed by the port engineer Bindon Blood Stoney (1828 to 1907) and built by Grendon and Co., Drogheda.  It was delivered to the Port in 1866, entered service in 1871 and was used in the building of the Port’s quay walls until 1958.  Stoney was a prodigious engineer and among his achievements were the building of the Boyne Viaduct in Drogheda, the construction of O’Connell Bridge and the building of many of the Port’s quay walls  including Sir John Rogerson’s Quay and North Wall Quay Extension.

The Diving Bell was used in the building of the Port’s quay walls from the Victorian era right up until almost the 1960s.  It was a ground-breaking piece of engineering innovation in its day.

Its lower section was hollow and bottomless, providing just enough room for six men to work at a time.  Once lowered into position on the riverbed, the crew entered through an access funnel from the surface and compressed air was fed in from an adjacent barge.  The men inside the bell worked on the river bed exposed at their feet, excavating the site where a massive concrete block would later go; all the excavated soil was stashed in trays hanging inside the bell, and brought up when the bell was lifted.

The project, which commences this week and opens in mid-June 2015, will elevate the 13m tall, 90 tonne Diving Bell onto a two metre steel structure, creating a ramped public access route underneath.  A water feature will also be installed beneath the structure accompanied by a series of interpretative panels explaining the historical, social and engineering significance of the Diving Bell.  The new exhibition will be illuminated at night time using energy efficient LED lighting.

The project has been designed with the expertise of a range of people including the architect Sean O’Laoire, the sculptor Vivienne Roche, Tom Cosgrave (professor of engineering at the University of Limerick) and Mary Mulvihill of Ingenious Ireland.

This is the first project in Dublin Port’s plan to create a ‘distributed museum’ of attractions across the Dublin docklands and into Dublin Port to preserve the port’s industrial heritage and history.

Weslin Construction Ltd. has been appointed to carry out the project, which will be completed by mid-June 2015, when the newly reconfigured Diving Bell will open again to the city.

Eamonn O’Reilly, Chief Executive, Dublin Port Company said: “The Diving Bell is a remarkable feat of Irish engineering and Dublin Port Company is proud to invest in its transformation and bring the history of this magnificent structure to life along the Liffey.  True to the commitment in our Masterplan, we are working to better integrate Dublin Port and the city. Developing the Diving Bell is the first step in our plan to create a distributed museum of port and industrial heritage attractions across the Dublin docklands and into the port.  We are confident that the Diving Bell will give Dubliners and visitors to the city a true sense of Dublin as a port city with a wealth of industrial heritage to discover.”

Betty Ashe of St. Andrew’s Resource Centre, Pearse Street, said: “I am delighted that the next phase of the Diving Bell Project is now underway, having been involved in a Millennium project with St. Andrew’s Resource Centre, the DDDA and Dublin Port Company to save and restore this fascinating artefact from the Victorian era.  As a port community, we have a duty to preserve local history for future generations.  I thank Dublin Port Company for sharing that vision and giving the Diving Bell a prominent place in the history books for this community and our city.”