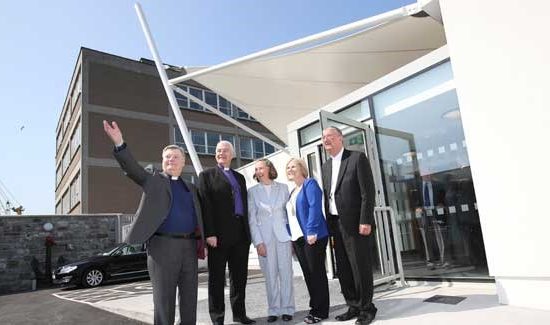 The Seafarers’ Centre breathes new life into the site of the old Odlums flour mill. Housed in the former Odlums workers’ canteen, which had been in use up to the mill’s closure in 2012, the Centre now provides a base for vital services to sailors docking in the port, an essential workforce of the city’s economy.  Features of the old canteen building such as decking, beams and the original exterior wall have been retained and preserved as part of the new design.

As Dublin Port’s first custom-built Seafarers’ Centre, it will support over 7,500 visiting seafarers a year arriving from all over the world, typically from countries such as India, China, Ukraine, Russia and the Philippines.

In addition to Dublin Port’s €500,000 investment, the International Transport Workers’ Federation has committed €55,000 in funding towards the completion of the Centre, helping to support its role in representing the best interests of transport workers globally.

Features of Dublin Port’s purpose-built Seafarers’ Centre include free Wi-Fi access for sailors to contact family and loved ones while ashore, cooking and dining facilities, and a relaxation and recreation space including a pool table, library and TV den with beanbags.

The new Centre also brings together two long-standing traditions in caring for seafarers in Dublin, the Anglican Mission to Seafarers (The Flying Angel) and the Catholic Apostleship of the Sea (Stella Maris). Both organisations will operate together under one roof at Dublin Port to provide spiritual guidance and friendship to seafarers of all faiths, and those of none. The Flying Angel will relocate to the Seafarers’ Centre from its existing location, while Stella Maris’ presence at the Centre will complement the organisation’s existing operation at its city centre location on Beresford Place.

I commend Dublin Port for creating such a welcoming facility for the thousands of seafarers who visit our shores and make a valuable contribution to our city and society. It’s wonderful to see the Catholic Apostleship of the Sea and the Anglican Mission to Seafarers working in tandem to continue their respective traditions of caring for seafarers, and providing these workers with a home from home.”

Chief Executive of Dublin Port Company Eamonn O’Reilly said; “We are delighted to open Dublin Port’s new purpose-built Seafarers’ Centre. It means that Dublin Port can provide sailors working thousands of miles from home with a space to rest, socialise and connect with family and friends under the care of Stella Maris and the Flying Angel. The Centre is a fine example of sustainable development in practice at Dublin Port. Odlums is an iconic part of Dublin Port’s industrial heritage, and that makes today’s opening particularly special.”