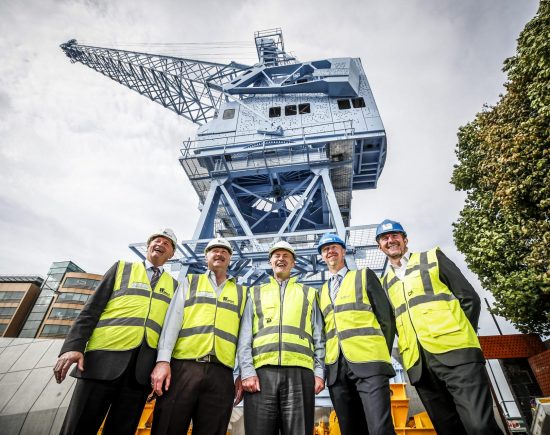 Dublin Port Company has made a striking change to the city’s skyline with the resurrection of one of its iconic 1960s cranes. The 115 feet tall Crane 292 has been lovingly restored to its former glory, with an illuminated cabin for powerful night-time impact, and now stands proudly adjacent to Port Centre once again.

Crane 292 is steeped in Port history having served as a ‘workhorse’ loading and unloading bulky material from ships at Alexandra Quay from 1964 through to its retirement in 1997. It was constructed by the famed Stothert and Pitt company of Bath, whose origins dated back to the great Victorian era of engineering. Crane 292 derived its name from its position as the second crane at berth 29 in an era when cranes were synonymous with the City and Port skyline – with up to 60 cranes at that time extending right down to Custom House quay, much closer to the city centre.

Speaking at the topping out ceremony to install the crane, Eamonn O’Reilly, Chief Executive, Dublin Port Company, said “The crane’s installation is part of the softening of the Port’s boundaries with the city and our drive to provide public amenity and realm at Port Centre for the first time in 35 years. The Port has always been integral to the City and this is a wonderful reminder of a time when the physical operations of the Port extended right into the heart of the city.  This is a wonderful new city landmark and marks a significant commitment in our Masterplan for the future development of the Port.

Dublin Port employee, Paddy Paisley was one of several operators who regularly worked on Crane 292.  “It brings back so many memories to see Crane 292 back and literally in lights, at the Port Centre. Modern Port operations have moved on so much in recent times, but it’s not that long ago that these cranes were the heartbeat of the Port and ensured everyone got the goods they needed on time, on a daily basis.  It’s a wonderful way to remind modern citizens of the importance of the Port in all our lives”.

The restoration and installation of the crane was carried by leading civil engineering firm Wills Bros on behalf of Dublin Port Company. Project Manager for Dublin Port James Kelleher said: “The restoration and installation of the crane presented a number of significant engineering, architectural design and logistical challenges including the closure of roads and deployment of heavy machinery and the realisation of quality targets for paintwork and the rebuilding of the cab assembly to a very high specification. The months of planning paid off with a seamless install delivered in line with health and safety best practice”.

Port Centre has been a hive of activity in recent months as the development of public space progresses.  Ongoing projects including the removal of a section of the existing old boundary wall to create new pedestrian entry points at Alexandra Road and East Wall Road. Visitors will discover a landscaped “maritime” garden with seats for reflection and relaxation. NCAD graduate and up and coming Irish artist Eimear Murphy’s new sculpture ‘The Drop’ will feature in the garden. The sculpture is made from solid concrete and plays with notions of fluidity in its design. The commissioning of this piece highlights the Port’s long-term commitment to supporting the arts.

Dublin Port Company is now focused on plans for a new internal road network, cycle lanes and pathways. Approved by Dublin City Council and scheduled for development, the three-kilometre route will give pedestrians and cyclists access to the Port estate for recreational use for the first time. It includes a perimeter route with vantage points overlooking the Tolka Estuary.