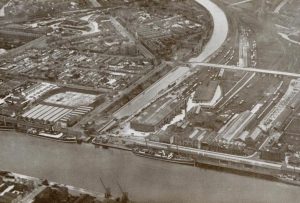 It is generally accepted that Dublin was little more than a monastic settlement until the Norse invasion in the 8th and 9th centuries when they selected the Liffey Estuary as their point of entry to the country as it provided relatively easy access to the central plains of Ireland. Trading with England and Europe followed which required port facilities so the development of Dublin Port is inextricably linked to the development of Dublin City.

The original Port of Dublin was situated upriver, a few miles from it’s current location near the modern Civic Offices at Wood Quay and close to Christchurch Cathedral. The port remained close to that area until the new Custom House opened in the 1790s. In medieval times Dublin shipped cattle hides to Britain and the continent, and the returning ships carried wine, pottery and other goods.

But Dublin Bay presented major dangers for shipping. In 1674 it was described as in its natural state, wild, open and exposed to every wind. Ships frequently had to seek shelter at Clontarf to the north of the city or at Ringsend. In certain wind conditions ships could not reach the city for several weeks at a time. Shipwrecks were common. So in 1716 work began on a bank to protect the south side of the channel at the mouth of the harbour, running from Ringsend to Poolbeg. A committee established by Dublin Corporation that was known as the Ballast Office Committee carried out this work.

The South bank provided only limited protection for shipping and in 1753, after a particularly stormy winter, the bank was replaced with a wall – the South Bull Wall. Bull is another word for strand, and the strands on either side of the mouth of the Liffey were known as North and South Bulls. The Poolbeg Lighthouse at the end of the Bull Wall was lit for the first time on 29 September 1767. It replaced a floating light that had been placed at the end of the wall to warn ships.

To save travel time, passengers and packets of mail landed at the end of the wall, or the Pigeon House, and they were rowed to the city in boats. 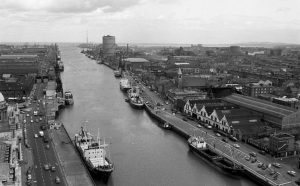 Dublin City prospered during the eighteenth century, and trade expanded. Merchants shipped cargos of linen and agricultural produce to Britain and farther afield. Returning ships carried coal and the luxury goods that were in demand in the great Georgian Houses.

By 1800 most of Dublin’s trade was to British ports. The shipping channel in Dublin Bay was too shallow for larger vessels, and many ships were forced to unload their cargo at Ringsend onto lighters that could travel upriver.

In 1800 a major survey of Dublin harbour by Captain William Bligh, who is remembered for his role in the mutiny on the HMS Bounty, recommended that the North Bull Wall should be constructed, parallel to the South Bull Wall to prevent sand building up in the mouth of the harbour. He correctly forecast that this would create a natural scouring action that would deepen the river channel. When the North Bull Wall was completed in 1825, sand gradually accumulated along its side until the modern Bull Island emerged. 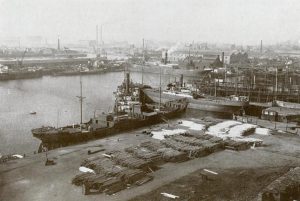 Until 1800 most trade took place on the south side of the River Liffey, but with the opening of the new Custom House in 1791, port development shifted to the north bank of the river. The original Custom House Dock opened in 1796. In 1821 it was supplemented by George’s Dock, which included large warehouses and storage vaults. These formed part of the Custom House Dock Area.

In 1836 construction work began on deep-water berths at the North Wall and this was extended in the 1870’s. Further deep-water berths, in the AlexandraBasin opened shortly before World War I and Ocean Pier, to the south-east of AlexandraBasin was completed after World War II. The 1950s brought the first roll-on, roll-off services, and container traffic has increasingly dominated port business since the 1960s.

Cargoes have changed in line as the Irish economy has revolved: live cattle have given way to chilled meat; oil is now more important than coal, and the containers carry the products of many of Ireland’s high-tech factories. Today Dublin Port Company Head office is located in the heart of Dublin Port on Alexandra Road. Dublin Port Company is a self-financing, private limited company wholly-owned by the State, whose business is to manage Dublin Port, Ireland’s premier port.

Established as a corporate entity in 1997, Dublin Port Company is responsible for the management, control, operation and development of the port. Dublin Port Company provides world-class facilities, services, accommodation and lands in the harbour for ships, goods and passengers.